Most things have evolved dramatically over the last 20 years in the office - phone calls yielded to text and instant messages, memos to emails, paper files to digital files.  Yet one area hasn't changed very much - that's meetings.. Yes, we have WebEx which allows for distributed teams to get together much like they were in the same room, but when it comes to planning, running, documenting, and referencing meetings, it has remained mostly unchanged.  Quality of meetings varies widely - some have well defined agenda, a lot don't.. Some focus on making decisions - a lot don't.. Meeting documentation is mostly very shoddy, and Action Items are best effort at best...

Why hasn't anyone tried to design a good web-based solution for meetings is anyone's guess.. My theory is that enterprise IT products are the last ones to receive any kind of real innovation either because startups worry about acceptance, competition with Microsoft, or can't relate to corporate problems very well.  If you think about it, the only new thing that's entered the corporate IT market are the collaboration solutions (like Jive and Yammer) and even that is thanks to FB developing the concept in the consumer space first.  But I digress..

I've been dabbling with figuring out what a solution like this could look like when I ran across Yamlabs.  It's a startup based out of Russia that recently received some funding from local angels/VCs and they are taking an aim at bringing meetings to the new era..

On the positive side I must say that they have put some good work into the system, providing a place to organize meetings, keep collaborative notes and even integrate with WebEx (although I haven't tested that) 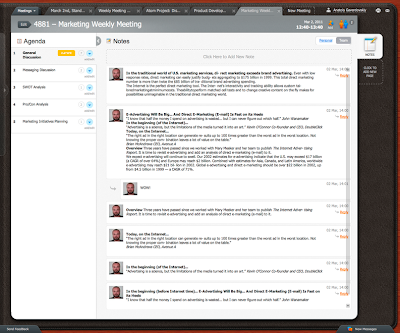 As a nice bonus, they've embedded some decision-making tools that can be incorporated into the meeting notes, which is pretty cool! 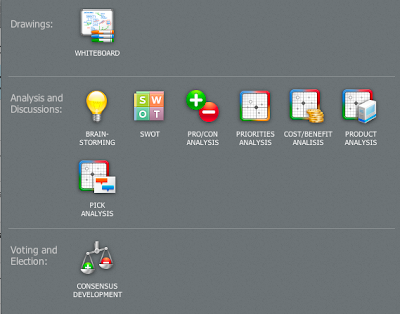 Where I think it falls short is in couple of areas:

So to sum it up, I think there's quite a bit of value to be added there and quite a bit of disruption to be done, and in my mind the market is ripe for a Meeting2.0 solution.  The key (as with any startup but especially here) is going to be figuring out how to minimize the friction and maximize the value.  I have some ideas of my own, but excited to see what YamLabs guys come up with!

Email ThisBlogThis!Share to TwitterShare to FacebookShare to Pinterest
Labels: Meetings