37 Signals announced a new feature, Deals - which is a welcome addition to an otherwise good "Service CRM" alternative. 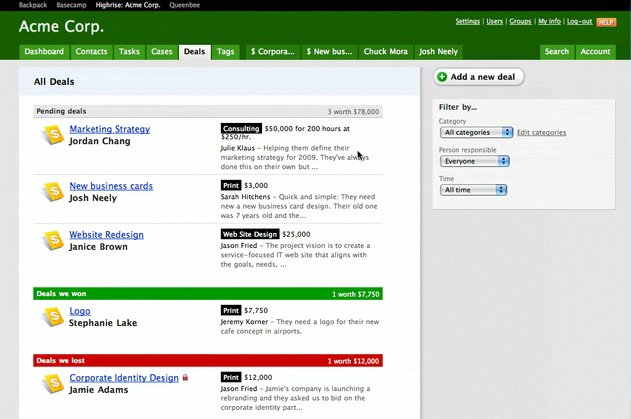 Now, deals (or opportunities as they are called in traditional CRM's) are nothing new, but 37 Signal's Highrise CRM does it with style (which is what sets them apart from the traditional CRM's in the first place).

This got me thinking about how exactly does style (usability) affect the technology adoption. I haven't seen much research on this, really; but it strikes me as a critical component, although I've seen systems that were adopted widely where the interface was horrendous. Care to weight in on that? How important is style? Does it become more important as the number of choices for particular functionality increase? (thinking Apple).. Meanwhile I'll dig around for some scholarly papers.
Posted by Unknown at 2:05 PM

wanted to point out that http://www.leadzep.com (Lead Zeppelin) now also has "Deals". You can assign tasks, add notes and attach files for your deals. Check it out!